Join us for online presentations featuring acclaimed literary critics, historians, and other scholars.

Sign up to receive invitations to future online events and monthly LOA news.

Please note: A complete listing of LOA’s Lift Every Voice events centered on African American poetry can be found at africanamericanpoetry.org.

Ernest Hemingway, one of the greatest writers and most towering presences in American literature, is published this season in the Library of America and explored in a forthcoming PBS documentary by Ken Burns and Lynn Novick airing in Spring 2021. Join Robert W. Trogdon, editor of Ernest Hemingway: The Sun Also Rises and Other Writings 1918-1926, Novick, and the film’s co-producer Sarah Botstein for a sneak preview of the film and a discussion of Hemingway’s complexity and his genius.
REGISTER

Wednesday, December 16
6:00-7:00 pm ET
Peanuts at 70: Writers and Cartoonists on Charlie Brown, Snoopy & the Gang, and The Meaning of Life

In 1950 Charles M. Schulz debuted a comic strip that is one of the indisputable glories of American popular culture—hilarious, poignant, inimitable. The Peanuts characters continue to resonate with millions of fans, their beguiling four-panel adventures and television escapades offering lessons about happiness, friendship, disappointment, childhood, and life itself.

Join editor Andrew Blauner and four distinguished contributors to the LOA collection The Peanuts Papers: Writers and Cartoonists on Charlie Brown, Snoopy & the Gang, and the Meaning of Life, for a seventieth anniversary conversation reflecting on the deeper truths of Schulz’s deceptively simple strip and its impact on their lives and art and on the broader culture.
REGISTER

November 19, 2020
The Nineteenth Amendment Turns 100: A New Look at the History of Women’s Suffrage

The history of how American women won the right to vote has long been told as a heroic saga of a few iconic leaders—white, native-born, and based in eastern cities—culminating in triumph in 1920. The real story is longer and more expansive, and its cast of characters surprisingly diverse.

The new Library of America collection American Women’s Suffrage: Voices from the Long Struggle for the Vote 1776–1965 offers a fresh account of one of the most significant movements of political mobilization in American history. The struggle, it reveals, was always about more than achieving the franchise, addressing fundamental questions about women’s roles in politics and society, the relationship between citizenship and voting rights, and more.

Volume editor Susan Ware, Honorary Women’s Suffrage Centennial Historian at the Radcliffe Institute, joined LOA editor Stefanie Peters for a conversation about the true history of the suffrage movement and the context it offers for social activism in our own time.

Known to millions for her classic story “The Lottery,” Shirley Jackson took the American gothic tradition of Poe, Hawthorne, and Lovecraft and brought it down to earth in novels and stories that brilliantly plumbed the dark underside of the conformist postwar decades. Jackson biographer Ruth Franklin, editor of Library of America’s Shirley Jackson: Four Novels of the 1940s and 50s, joins novelist and literary critic Francine Prose and playwright John Guare for a pre-Halloween conversation about one of our most haunting writers.

October 13, 2020
The Paranoid Style in American Politics: Revisiting Richard Hofstadter in the Time of Trump

In his Pulitzer Prize–winning Anti-Intellectualism in American Life (1963) and in The Paranoid Style in American Politics (1965), Richard Hofstadter explored the persistent strains of irrationality and conspiratorial thinking in American culture and their threat to our democratic politics. How can Hofstadter help us make sense of 2020, a year when fringe conspiracy theories moved into the political and media mainstream? Acclaimed scholars Sean Wilentz, editor of LOA’s authoritative Richard Hofstadter edition, Eric Foner, Arlie Hochschild, and Ira Katznelson discuss Hofstadter’s work as a touchstone for navigating a polarized and unstable political climate.

In 1965, at a critical juncture in the Civil Rights Movement, James Baldwin’s essay “The White Man’s Guilt" unmasked the myths and lies that sustain racial injustice in America. We’re at a parallel moment now, writes Eddie S. Glaude, Jr. in his new book Begin Again: James Baldwin’s America and Its Urgent Lessons For Our Own. In this LOA Live webinar Glaude, Distinguished University Professor of African American Studies at Princeton, explores the contemporary resonances of Baldwin’s powerful and prophetic piece.

On February 11, 1861, Abraham Lincoln boarded a train in Springfield, Illinois bound for Washington and his inauguration as leader of a tragically divided nation. Join historian Ted Widmer, author of Lincoln on the Verge: Thirteen Days to Washington and editor of Library of America’s two-volume edition of American Speeches, as he explores the President-Elect’s dangerous and transformative journey to greatness while the fate of American democracy hung in the balance.

Presented in partnership with the American Historical Association, ALSCW, the Gilder Lehrman Institute, the Massachusetts Historical Society, the National Archives, and the National Council on History Education.

New productions are reassessing and updating great Golden Age Broadway musicals like Oklahoma!, South Pacific, and My Fair Lady to reflect contemporary aspirations for American society. Are these new interpretations departing from or reviving their original spirit and meaning? Join Laurence Maslon, NYU arts professor and editor of Library of America’s American Musicals; Tazewell Thompson, librettist (Blue) and director (Porgy and Bess); and Ted Chapin, president of the Rodgers and Hammerstein Organization, for behind-the-scenes stories and conversation about the present and future of a great American art form.

August 6, 2020
The Fate of the Earth: Jonathan Schell and His Legacy

To mark the seventy-fifth anniversary of the bombings of Hiroshima and Nagasaki and the fiftieth anniversary of the first Earth Day, renowned psychiatrist and author Robert Jay Lifton and Katrina vanden Heuvel, publisher of The Nation, discuss the writer and friend who put his remarkable literary gifts in the service of disarmament, nonviolence, international cooperation, and the irresistible power of democracy. Moderated by Martin J. Sherwin, editor of the new LOA collection Jonathan Schell: The Fate of the Earth, The Abolition, The Unconquerable World.

Presented in partnership with The Nation, Type Media Center, the International Campaign to Abolish Nuclear Weapons (ICAN), Friends of the Earth, Physicians for Social Responsibility, Bulletin of the Atomic Scientists, The New Press, Arms Control Association, and Global Zero.

July 28, 2020
Who Tells Your Story: Joanne B. Freeman on Hamilton and History

As Lin-Manuel Miranda’s Hamilton streams on Disney+, Joanne B. Freeman, Professor of History and American Studies at Yale University and editor of the Library of America edition of Hamilton’s writing (which helped to inspire Miranda), discusses the musical and what it tells us about how history is made and remade. (1 hr., 3 min.)

July 16, 2020
Reading James Baldwin Now: Darryl Pinckney on No Name in the Street

Novelist and cultural critic Darryl Pinckney offers a close reading of Baldwin’s beautiful, blistering memoir of the events that forged his consciousness of race and identity: growing up in Harlem, the murders of Martin Luther King, Jr., and Malcolm X, his long residence in France, his fateful decision to return to the American South. (58: 17)

Presented in partnership with the Schomburg Center for Research in Black Culture, the Hutchins Center for African and African American Research, the Association of Literary Scholars, Critics & Writers (ALSCW), the American Writers Museum, and the University of Houston.

The prophetic power of James Baldwin’s explorations of race and America’s unfulfilled promise has never been more illuminating or more necessary. Farah Jasmine Griffin, chair of Columbia University’s Department of African American and African Diaspora Studies, offers a close reading of Baldwin’s unforgettable story of a jazz pianist’s struggles with his art and his addiction. (1 hr., 1 min.)

Presented in partnership with the Schomburg Center for Research in Black Culture, the Hutchins Center for African and African American Research, the University of Houston, the Association of Literary Scholars, Critics & Writers (ALSCW), and the American Writers Museum.

June 16, 2020
Harold Bloom and the American Canon from Emerson to Toni Morrison
A Conversation with David Mikics

Presented in partnership with Tablet, The Association of Literary Scholars, Critics, and Writers (ALSCW), and the University of Houston.

June 4, 2020
What Is American Conservatism?
A Conversation with Andrew J. Bacevich and Sean Wilentz

Andrew J. Bacevich, editor of Library of America’s American Conservatism: Reclaiming an Intellectual Tradition, and historian Sean Wilentz engage in an urgent and timely conversation about the past, present, and future of an often misunderstood tradition of American political thought. (1 hr., 1 min.) 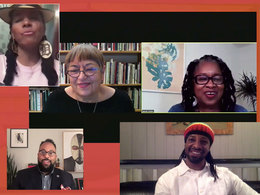 Watch: Poets, actors, and others launch Lift Every Voice with rousing online event

Songs in the night: Spirituals and James Baldwin’s “Sonny’s Blues”

Bloom, Baldwin, and the prophet Jeremiah: A chat with David Mikics