“Jack London used to like to eat raw-meat sandwiches, and he sometimes fancied himself a ‘blood beast’ rampaging through life. . . . Alaska in winter made him as a writer. The Klondike was where the ‘cold of space smote the unprotected tip of the planet, and he, being on that unprotected tip, received the full force of the blow.’ He awoke: he assumed, in the clarity of the frozen moment, the mantle of his full powers. . . . May he roam forever in the Klondike of our hearts, he of the numberless stories, the fierce embrace of all of harsh existence. Give his stories to your sons and daughters, and for strong pleasure, read him again yourself.” — Los Angeles Times Book Review 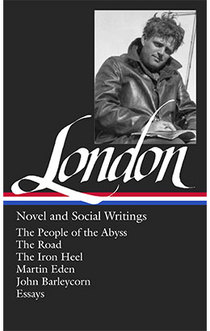