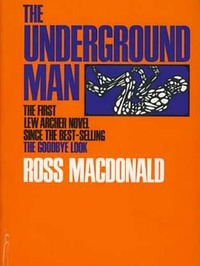 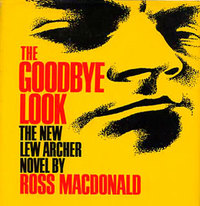 The Goodbye Look: The “most unusual story” that brought Ross Macdonald mainstream success 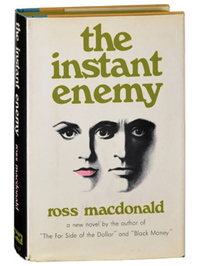 Cautionary tale as catharsis in Ross Macdonald’s The Instant Enemy

Major works:
The Galton Case • The Chill • The Underground Man

Kenneth Millar, who published most of his novels under the name Ross Macdonald, was a master of all the kinds of devices and deceptions on which mystery fiction depends. Books like The Galton Case and The Chill and The Far Side of the Dollar remain unsurpassed for the deepening intricacy of their narratives, the awesomely engineered dovetailing of hidden relationships and long-buried crimes. In his work, as he explained to his editor Alfred A. Knopf, the mystery is far more than a puzzle to be solved: “Plot is important to me. I try to make my plots carry meaning, and this meaning such as it is determines and controls the movement of the story.” The meanings he explored expressed both the privations and troubles of his own youth in Canada and a larger vision of the guilt and raging discontent simmering not far beneath the surface of the apparently thriving Southern California where he spent his adult life. The puzzles he so brilliantly constructed culminate in revelations not far from the stark clarity of tragedy.

“I’ve been reading your books as they came out since away back when you were John Ross Macdonald, and it’s not only the first reading but return to them that gives me a great deal of pleasure. . . What fascinates me is reading with the sense of the one who has invented the characters and the one, himself a character, who is in progress of finding out their secrets down to the last, identifying them for good, moving them one by one into their right places & locking them up in the whole to make the pattern. . . [I]n the form you use, the method is pure, the scrupulous search or strategy is the same thing as the truth it’s uncovering—And this is not only compelling but moving. It’s the real beauty of the novels’ construction, to me.”
—Eudora Welty, letter to Kenneth Millar [Ross Macdonald], May 10, 1970

Excerpt from the essay

Down These Streets a Mean Man Must Go

I don’t intend to suggest that popular literature is primarily a matrix for higher forms. Popular fiction, popular art in general, is the very air a civilization breathes. (Air itself is 80 percent nitrogen.) Popular art is the form in which a culture comes to be known by most of its members. It is the carrier and guardian of the spoken language. A book which can be read by everyone, a convention which is widely used and understood in all its variations, holds a civilization together as nothing else can.
It reaffirms our values as they change, and dramatizes the conflicts of those values. It absorbs and domesticates the spoken language, placing it in meaningful context with traditional language, forming new linguistic synapses in the brain and body of the culture. It describes new modes of behavior, new versions of human character, new shades and varieties of good and evil, and implicitly criticizes them. It holds us still and contemplative for a moment, caught like potential shoplifters who see their own furtive images in a scanning mirror, and wonder if the store detective is looking.