Earlier this year, on our Story of the Week site, Library of America presented “A Magic Kingdom” from E. O. Wilson’s 1994 memoir Naturalist, recalling a fascination with science that began when he was seven years old.

Wilson’s early interest was prompted by a relatively unusual event for a child raised in the 1930s: the breakup of his parents’ marriage and their eventual divorce. Going back and forth between his mother and father, moving from city to city, transferring from school to school, he soon realized that the one constant in his life was nature—whether at the beach, in the woods, or even on a sidewalk. “Animals and plants I could count on,” Wilson wrote. “Human relationships were more difficult.”

By the time he was a teenager, he had determined to become a biologist. Before he was twenty, he had published his first scientific paper, his early observations of the soon-to-be-notorious red imported fire ant, which became a scourge in the South within a matter of years. “Most children have a bug period,” he wrote, “and I never grew out of mine.”

Wilson died this past Sunday at the age of 92, after a life of delivering “staggering insights on the average of one a decade” (as Bill McKibben put it). We present in full “A Magic Kingdom,” in which readers can read how, sometimes, that kid with the magnifying glass and butterfly net can indeed become a world-famous scientist.

Charlotte Perkins Gilman, “According to Solomon” 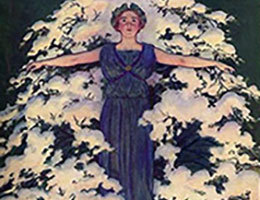 Dorothy Parker, “The Christmas Magazines and the Inevitable Story of the Snowbound Train”