Two hundred years ago, in 1819 and 1820, Washington Irving published The Sketch Book of Geoffrey Crayon, Gent. in seven installments in New York. If the title doesn’t ring any bells, its two most famous stories will: “Rip Van Winkle” and “The Legend of Sleepy Hollow.”

The book became a best seller not only in the United States but also in England and soon across the European continent, and its author became an international celebrity. Suddenly “Old World” critics began to entertain the idea that the American backwaters might be capable of producing books worth reading. Only a year before The Sketch Book began appearing, one British critic, in an essay on American commerce, stated bluntly that “The Americans have no national literature and no learned men,” and commented that libraries and parlors in the States were filled with books from England. Although there were American short stories and novels before Irving came along—the Gothic romances of Charles Brockden Brown come to mind—no writer of fiction had the influence that Irving would have on the subsequent generation of writers. So it is perhaps no exaggeration, then, to say that 2019–2020 has been the bicentennial of American fiction.

Over the next few years, “the father of American literature” (as he is still often called) continued to publish collections of tales and sketches and, although none of his stories became as famous as his first two hits, many are still widely anthologized and well regarded, including such classics as “The Devil and Tom Walker,” “The Adventure of the German Student,” and “The Storm-Ship.” Perhaps one of the least expected of his many lesser-known tales is the 1824 sketch “The Poor Devil Author,” in which Washington Irving, now forty years old, mocks the pretensions of a literary neophyte who, much as Irving himself did, gives up everything to become a full-time writer. Irving’s fictional counterpart, however, finds a different kind of success than did his author. We present this satirical spoof as our Story of the Week selection. 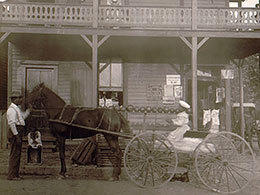