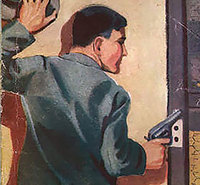 Dashiell Hammett, “The Gutting of Couffignal” 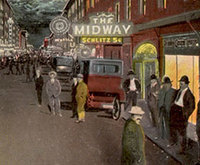 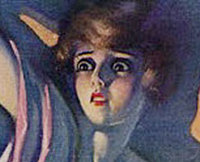 “During the twenties and thirties I lived in various cities large and small, and saw a good deal of gambling and corruption. But I didn’t get a picture of the way cities were run until I found the novels of Dashiell Hammett. They did a great deal to turn me in the direction of the hard-boiled mystery novel. The term hard-boiled is not necessarily connected with violence, it has more to do with a realistic attitude toward life as reflected in the language.”
—Ross Macdonald

“We begin well, sir,” the fat man purred, turning with a proffered glass in his hand. “I distrust a man that says when. If he’s got to be careful not to drink too much it’s because he’s not to be trusted when he does.”
Spade took the glass and, smiling, made the beginning of a bow over it.
The fat man raised his glass and held it against a window’s light. He nodded approvingly at the bubbles running up in it. He said: “Well, sir, here’s to plain speaking and clear understanding.”
They drank and lowered their glasses.
The fat man looked shrewdly at Spade and asked: “You’re a close-mouthed man?”
Spade shook his head. “I like to talk.”
“Better and better!” the fat man exclaimed. “I distrust a close-mouthed man. He generally picks the wrong time to talk and says the wrong things. Talking’s something you can’t do judiciously unless you keep in practice.”

Read a passage from The Maltese Falcon by Dashiell Hammett