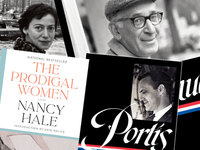 “Pick up any novel by Portis and open it to any page and you will find something so devastatingly strange and fresh and hilarious that you will want to run into the next room and read it aloud to somebody. His language is precise but whimsical, understated but anarchic, and as with Barbara Pym or P. G. Wodehouse, it’s tough to communicate the flavor of it without resorting to long quotes. All readers who love Portis have lines they like to swap back and forth; and a conversation among his admirers will mostly consist of such gems — committed to memory — exchanged and mutually admired.”—Donna Tartt

“I am eager to read anything Portis writes because of the way he makes me chortle, to myself and with nearly everyone whose sensibility I hold dear.”—Roy Blount Jr.

“Rereading Portis is one of the great pure pleasures—both visceral and cerebral—available in modern American literature.”—Ron Rosenbaum