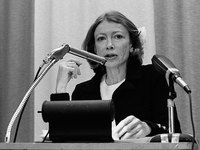 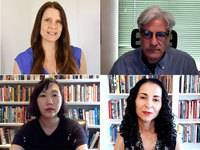 Joan Didion: The Art of Storytelling

Major works:
Slouching Towards Bethlehem • Play It As It Lays • The White Album • The Year of Magical Thinking

“Joan Didion is not, of course, alone in her passionate investigation of the atomization of contemporary society. But she is one of the very few writers of our time who approaches her terrible subject with absolute seriousness, with fear and humility and awe. Her powerful irony is often sorrowful rather than clever.”
— Joyce Carol Oates

“Her sense of timing, sentence by sentence and in the arrangement of scenes, draws the reader forward. Her manner is deadpan funny, slicing away banality with an air that is ruthless yet meticulous. She uses few adjectives. The unshowy, nearly flat surface of her writing is rippled by patterns of repetition: an understatement that, like Hemingway’s, attains its own kind of drama. Repetition and observation narrate emotion by demonstrating it, so that restraint itself becomes poetic, even operatic.”
— Robert Pinsky

We put “Lay Lady Lay” on the record player, and “Suzanne.” We went down to Melrose Avenue to see the Flying Burritos. There was a jasmine vine grown over the verandah of the big house on Franklin Avenue, and in the evenings the smell of jasmine came in through all the open doors and windows. I made bouillabaisse for people who did not eat meat. I imag­ined that my own life was simple and sweet, and sometimes it was, but there were odd things going around town. There were rumors. There were stories. Everything was unmention­able but nothing was unimaginable. This mystical flirtation with the idea of “sin” — this sense that it was possible to go “too far,” and that many people were doing it — was very much with us in Los Angeles in 1968 and 1969. A demented and se­ductive vortical tension was building in the community. The jitters were setting in. I recall a time when the dogs barked every night and the moon was always full. On August 9, 1969, I was sitting in the shallow end of my sister­ in­ law’s swimming pool in Beverly Hills when she received a telephone call from a friend who had just heard about the murders at Sharon Tate Polanski’s house on Cielo Drive. The phone rang many times during the next hour. These early reports were garbled and contradictory. One caller would say hoods, the next would say chains. There were twenty dead, no, twelve, ten, eighteen. Black masses were imagined, and bad trips blamed. I remem­ber all of the day’s misinformation very clearly, and I also re­member this, and wish I did not: I remember that no one was surprised.

Read a passage from The White Album by Joan Didion 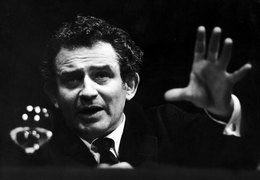 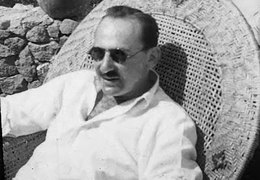