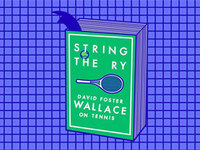 Game, set, match: Bill Gates names String Theory one of his five books of the year 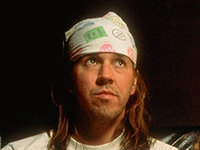 Major works:
Infinite Jest • Brief Interviews with Hideous Men • Consider the Lobster • This Is Water • “Federer Both Flesh and Not”

“The curious thing about David’s fiction, though, is how recognized and comforted, how loved, his most devoted readers feel when reading it. To the extent that each of us is stranded on his or her own existential island—and I think it’s approximately correct to say that his most susceptible readers are ones familiar with the socially and spiritually isolating effects of addiction or compulsion or depression—we gratefully seized on each new dispatch from that farthest-away island which was David. At the level of content, he gave us the worst of himself: he laid out, with an intensity of self-scrutiny worthy of comparison to Kafka and Kierkegaard and Dostoyevsky, the extremes of his own narcissism, misogyny, compulsiveness, self-deception, dehumanizing moralism and theologizing, doubt in the possibility of love, and entrapment in footnotes-within-footnotes self-consciousness. At the level of form and intention, however, this very cataloguing of despair about his own authentic goodness is received by the reader as a gift of authentic goodness: we feel the love in the fact of his art, and we love him for it.”
—Jonathan Franzen

When I left my boxed township of Illinois farmland to attend my dad’s alma mater in the lurid jutting Berkshires of western Massachusetts, I all of a sudden developed a jones for mathematics. I’m starting to see why this was so. College math evokes and catharts a Midwesterner’s sickness for home. I’d grown up inside vectors, lines and lines athwart lines, grids—and, on the scale of horizons, broad curving lines of geographic force, the weird topographical drain-swirl of a whole lot of ice-ironed land that sits and spins atop plates. The area behind and below these broad curves at the seam of land and sky I could plot by eye way before I came to know infinitesimals as easements, an integral as schema. Math at a hilly Eastern school was like waking up; it dismantled memory and put it in light. Calculus was, quite literally, child’s play.