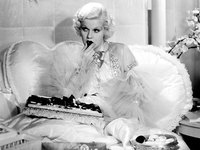 Major works:
Of Thee I Sing (with Morrie Ryskind) • Dinner at Eight (with Edna Ferber) • You Can’t Take It with You (with Moss Hart) • The Man Who Came to Dinner (with Moss Hart)

No, I’m just telling you the truth. Do you know what Stengel said, out in the hall, there? He said, “Why he’s a wreck of a man.” Of course, you never were an actor, but you did have looks. Well, they’re gone. And you don’t have to take my word for it. Look in the mirror. They don’t lie. Take a good look. (Comes closer to him, while Larry retreats.) Look at these pouches under your eyes. Take a look at those creases. You got wattles under your chin. (His taunting hand is up, pointing at this, at that. Larry slaps it down like a frightened child.) You sag like an old woman. (A gesture indicates the face of the man before him.) Get a load of yourself. (Turns and walks a few jaunty steps toward the door, claps his hat on his head.) What’s the matter! Afraid! You ain’t seen nothin’ yet! Wait till you start tramping round to offices, looking for a job. No agent’ll handle you. Wait till you start sitting in anterooms, hours and hours. Giving your name to office boys who never heard of you. You’re through, Renault. You’re through in pictures, and plays, and vaudeville, and radio, and everything! You’re a corpse, and you don’t even know it. Go get yourself buried. (Goes, closing the door decisively behind him.)

Read a passage from Dinner at Eight by George S. Kaufman (with Edna Ferber)