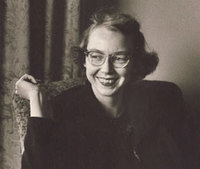 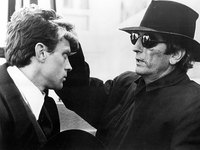 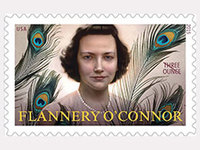 Brad Gooch: Flannery O’Connor’s apocalyptic tall tales “give us the news that we need to hear”

Major works:
Wise Blood • A Good Man Is Hard to Find • The Violent Bear It Away • “Everything That Rises Must Converge”

“Not the shimmering multidimensionality of modernism but the two-dimensionality of cartoon art is at the heart of the work of O’Connor, whose unshakable absolutist faith provided her with a rationale with which to mock both her secular and bigoted Christian contemporaries in a succession of brilliantly orchestrated short stories that read like parables of human folly confronted by mortality.”
—Joyce Carol Oates

Mr. Paradise had left his automobile back some way on the road and had walked to the place where he was accustomed to sit almost every day, holding an unbaited fishline in the water while he stared at the river passing in front of him. Anyone looking at him from a distance would have seen an old boulder half hidden in the bushes.

Bevel didn’t see him at all. He only saw the river, shimmering reddish yellow, and bounded into it with his shoes and his coat on and took a gulp. He swallowed some and spit the rest out and then he stood there in water up to his chest and looked around him. The sky was a clear pale blue, all in one piece—except for the hole the sun made—and fringed around the bottom with treetops. His coat floated to the surface and surrounded him like a strange gay lily pad and he stood grinning in the sun. He intended not to fool with preachers any more but to Baptize himself and to keep on going this time until he found the Kingdom of Christ in the river. He didn’t mean to waste any more time. He put his head under the water at once and pushed forward.

In a second he began to gasp and sputter and his head reappeared on the surface; he started under again and the same thing happened. The river wouldn’t have him. He tried again and came up, choking. This was the way it had been when the preacher held him under—he had had to fight with something that pushed him back in the face. He stopped and thought suddenly: it’s another joke, it’s just another joke! He thought how far he had come for nothing and he began to hit and splash and kick the filthy river. His feet were already treading on nothing. He gave one low cry of pain and indignation. Then he heard a shout and turned his head and saw something like a giant pig bounding after him, shaking a red and white club and shouting. He plunged under once and this time, the waiting current caught him like a long gentle hand and pulled him swiftly forward and down. For an instant he was overcome with surprise; then since he was moving quickly and knew that he was getting somewhere, all his fury and fear left him.

Mr. Paradise’s head appeared from time to time on the surface of the water. Finally, far downstream, the old man rose like some ancient water monster and stood empty-handed, staring with his dull eyes as far down the river line as he could see.

Read a passage from The River by Flannery O'Connor 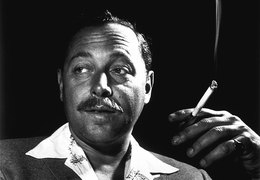