The verges and islets of the lagoon were elegantly embellished with flowering plants and shrubs; the laughing coots with wings half spread were tripping over the little coves and hiding themselves in the tufts of grass; young broods of the painted summer teal, skimming the still surface of the waters, and following the watchful parent unconscious of danger, were frequently surprised by the voracious trout; and he, in turn, as often by the subtle greedy alligator. Behold him rushing forth from the flags and reeds. His enormous body swells. His plaited tail brandished high, floats upon the lake. The waters like a cataract descend from his opening jaws. Clouds of smoke issue from his dilated nostrils. The earth trembles with his thunder. When immediately from the opposite coast of the lagoon, emerges from the deep his rival champion. They suddenly dart upon each other. The boiling surface of the lake marks their rapid course, and a terrific conflict commences. They now sink to the bottom folded together in horrid wreaths. The water becomes thick and discolored. Again they rise, their jaws clap together, re-echoing through the deep surrounding forests. Again they sink, when the contest ends at the muddy bottom of the lake, and the vanquished makes a hazardous escape, hiding himself in the muddy turbulent waters and a sedge on a distant shore. The proud victor exulting returns to a place of action. The shores and forests resound his dreadful roar, together with the triumphing shouts of the plaited tribes around, witnesses of the horrid combat.

Read a passage from Travels by William Bartram 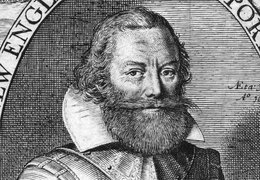 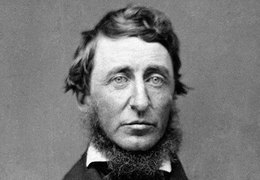 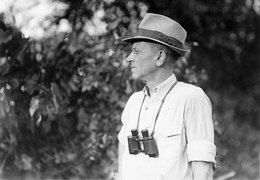