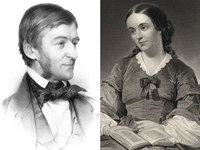 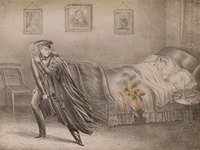 Nathaniel Hawthorne, “A show of wax-figures” 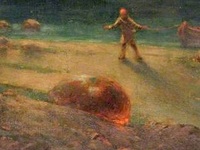 “Whether Hawthorne has simply availed himself of this mystical blackness as a means to the wondrous effects he makes it to produce in his lights and shades; or whether there really lurks in him, perhaps unknown himself, a touch of Puritanic gloom,—this I cannot altogether tell. Certain it is, however, that this great power of blackness in him derives its force from its appeals to that Calvinistic sense of Innate Depravity and Original Sin, from whose visitations, in some shape or other, no deeply thinking mind is always and wholly free. . . At all events, perhaps no writer has ever wielded this terrific thought with greater terror than this same harmless Hawthorne.”
—Herman Melville, “Hawthorne and His Mosses” (1850)

“[The] publication of The Scarlet Letter was in the United States a literary event of the first importance. The book was the finest piece of imaginative writing yet put forth in this country. . . It is beautiful, admirable, extraordinary; it has in the highest degree that merit which I have spoken of as the mark of Hawthorne’s best things—an indefinable purity and lightness of conception, a quality which in a work of art affects one in the same way as the absence of grossness does in a human being.”
—Henry James, Hawthorne (1879)

In truth, all through the haunted forest, there could be nothing more frightful than the figure of Goodman Brown. On he flew, among the black pines, brandishing his staff with frenzied gestures, now giving vent to an inspiration of horrid blasphemy, and now shouting forth such laughter, as set all the echoes of the forest laughing like demons around him. The fiend in his own shape is less hideous, than when he rages in the breast of man. Thus sped the demoniac on his course, until, quivering among the trees, he saw a red light before him, as when the felled trunks and branches of a clearing have been set on fire, and throw up their lurid blaze against the sky, at the hour of midnight. He paused, in a lull of the tempest that had driven him onward, and heard the swell of what seemed a hymn, rolling solemnly from a distance, with the weight of many voices. He knew the tune; it was a familiar one in the choir of the village meeting-house. The verse died heavily away, and was lengthened by a chorus, not of human voices, but of all the sounds of the benighted wilderness, pealing in awful harmony together. Goodman Brown cried out; and his cry was lost to his own ear, by its unison with the cry of the desert.

Read a passage from Young Goodman Brown by Nathaniel Hawthorne 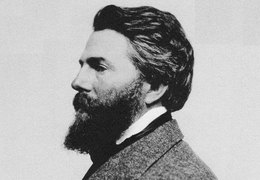