A Mask for Janus | Dancing Bears | Green with Beasts | The Drunk in the Furnace | The Moving Target | The Lice | The Carrier of Ladders | Writings to an Unfinished Accompaniment | The Compass Flower | Opening the Hand | The Rain in the Trees | Travels | uncollected poems
Edited by J. D. McClatchy

“Since early on, almost every step of the way, Merwin has shown himself to be wrestling with his aesthetic ideas and ideals, striving toward simplicity, though held in check by a showy desire to make complicated transformations happen, to impress the reader with virtuosity. He began to overcome this showiness by the time of The Lice. It’s nothing short of enlightening to watch him make that journey.”—Craig Morgan Teicher, Los Angeles Review of Books 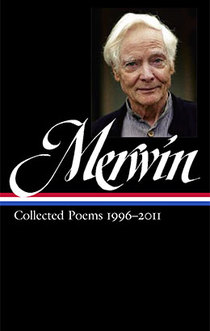