If you believe in LOA’s mission and would like to support our activities in a substantial way, nothing is more helpful than endowing a volume in the series to keep it permanently in print. Your gift will have prominent recognition in the book, and as a Guardian of American Letters you will make a lasting contribution to American culture.

This month’s featured candidate for adoption is Herman Melville: Typee, Omoo, Mardi, the inaugural volume in the Library of America series. Herman Melville: Typee, Omoo, Mardi offers authoritative texts of Melville’s first three novels—stirring romances of the South Seas drawn in part on Melville’s own experiences as a sailor in the early 1840s. Typee, his debut, is presented in the complete unexpurgated text of the first edition, whose relatively frank sexuality and irreverence toward missionaries he toned down in subsequent reprintings.

A fully tax-deductible contribution of $75,000 to the Guardians of American Letters Fund will ensure that Melville’s earliest works—an essential part of the American literary heritage—are always available for current and future generations of readers.

Learn more about becoming a Guardian of American Letters.

Library of America and the Chicago Public Library celebrate Juneteenth 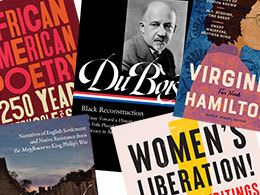 Michael Gorra: Elizabeth Spencer and the 1956 novel deprived of the Pulitzer Prize