Back Easy in your easy chair: Laurence Maslon raises a virtual curtain on American Musicals Print
Share
Audio May 7, 2020

In this age of accelerating self-isolation, it seems like a natural pastime to curl up in an armchair with your favorite novel (courtesy of Library of America, of course). With a Broadway musical? Mmm—that’s a bit trickier these days.

When I edited the two-volume collection American Musicals: The Complete Books and Lyrics of Sixteen Broadway Classics back in 2014, we knew that concentrating on the words of these great musicals would mean leaving out that other crucial component: the music. The idea of including sixteen cast albums along with the volumes—as attractive an idea that might be—contained too many intractable technical and contractual complications. There is much to enjoy in this set (and don’t just take my word for it: “It is as valuable as it is purely enjoyable,” wrote the New York Times), but having the complementary tunes makes American Musicals an even better candidate for armchair curling.

Well, as Tevye put it in Fiddler on the Roof, it’s a new world, Golde. Thanks to the fullness of time and a good Internet connection, you can now enjoy the music of these sixteen shows along with the words. Since 2012, I have been the host and producer of a weekly radio program, Broadway to Main Street, broadcast out of WLIW, an NPR affiliate on the East End of Long Island. Each episode highlights a particular topic. I often tackle the full score to an important show—but with a difference. Rather than play only the show’s original Broadway cast album, I include revival and film versions, popular standard recordings, cabaret renditions, jazz covers, and cut musical numbers; in other words, I curate all versions of a classic score and provide listeners with the best renditions of its best songs—each framed by historical context. All this makes a listening experience that’s “easy in your easy chair,” to paraphrase lyricist Lorenz Hart.

In the six years since the Library of America edition, episodes on all sixteen scores in both volumes have been broadcast. Below are links to each of these Broadway to Main Street shows and some notes about each program. Broadway musicals usually perform eight times a week—including two or three matinees—so think of this as two weeks of free Broadway, curled up in your easy chair.

Show Boat
The granddaddy of American narrative musicals. Jerome Kern and Oscar Hammerstein’s score has been recorded in dozens of versions—films, revivals, and pop albums. This episode includes Paul Robeson (who didn’t act in the original 1927 version), Lena Horne, and selections from a seminal 1988 EMI studio recording of every note Kern wrote for the show—including some cut songs reproduced in the LOA edition.
Listen

As Thousands Cheer
The greatest satirical revue of the Depression is a time capsule of preoccupations and personalities of the era. Irving Berlin’s timeless score was never recorded as a cast album, so this broadcast brings together the greatest interpretations of the show’s highlights by artists including Ethel Waters, Clifton Webb (both of the original cast), Ella Fitzgerald, and Patti LuPone.
Listen

Pal Joey
Because of a music publisher’s strike in 1940, this seminal Rodgers and Hart score was never recorded in its day. When a 1948 piano rendition of “Bewitched, Bothered, and Bewildered” became a surprise hit, Pal Joey was back in business with a 1951 revival. This broadcast features Frank Sinatra, Chet Baker, Steve Lawrence, and Bobby Short.
Listen

Oklahoma!
The first collaboration between Rodgers and Hammerstein became a major touchstone for the American musical and one of the first (nearly complete) cast albums. Here are members of the original cast, plus Hugh Jackman, Coleman Hawkins and more. A bonus second episode details the history of recording the musical, particularly the 2019 revival.
Listen to Episode 1
Listen to Episode 2

On the Town
Leonard Bernstein’s majestic 1944 score was another classic that never got a proper cast album in its day. The maestro leads the New York Philharmonic in some of his transcendent dance music for the show, plus lyricists Comden and Green performing their material—Frank Sinatra and Mel Tormé, too.
Listen

Finian’s Rainbow
The politically tinged lyrics of Yip Harburg’s masterpiece are floated on a rainbow of melody by Burton Lane. Singers here include Petula Clark, Luther Vandross, and Ella Fitzgerald and Frank Sinatra in some rare outtakes from an uncompleted animated version.
Listen

Kiss Me, Kate
Cole Porter’s finest score was the basis for one of Columbia’s very first original LPs in 1949. We have the show’s lead, Alfred Drake (father of Candace Wainwright, who underwrote Library of America’s two-volume American Musicals set), plus a rare recording of Jack Klugman and Tony Randall singing “Brush Up Your Shakespeare!”
Listen

South Pacific
The Pulitzer Prize-winning adaptation of James Michener’s short stories was Rodgers and Hammerstein at their finest. The original cast album with Ezio Pinza and Martin was Number One on the charts—of all popular music—for over a year. They’re joined by other renditions, including ones by Peggy Lee and Mandy Patinkin.
Listen

Guys and Dolls
Frank Loesser’s score opened up the 1950s with a perennial classic, full of songs that made the Hit Parade. This episode has renditions by Frank Sinatra, Nathan Lane, Jo Stafford, and Loesser himself.
Listen

The Pajama Game
This episode includes a value-added-extra: excerpts from the score to Damn Yankees, also by Jerry Ross and Richard Adler, who brought a fresh new sound to Broadway in the mid-1950s. Great hits sung by the original casts, plus Tony Bennett, Rosemary Clooney, and the Surf Dawgs (yes, the Surf Dawgs).
Listen

My Fair Lady
Lerner and Loewe took the sophistication of Bernard Shaw and transformed it into one of Broadway’s greatest shows. Its original cast album stayed on the charts for almost a decade—making it one of the most popular recordings in American history. Members of various original and revival casts are joined by some jazz artists—Mel Tormé, Cassandra Wilson, Nat “King” Cole, and others.
Listen

Gypsy
This episode allows the listener to do some comparison shopping among some of Broadway’s greatest leading ladies: Ethel Merman, Angela Lansbury, Bette Midler, Bernadette Peters, Patti LuPone—all of whom played Momma Rose at some point—performing the great Jule Styne and Stephen Sondheim score.
Listen

A Funny Thing Happened on the Way to the Forum
Stephen Sondheim’s first big success as composer and lyricist was tailored to the antics of some highly skilled clowns, so it wasn’t as accessible to the Hit Parade. Nevertheless, Zero Mostel, Nathan Lane, Phil Silvers, Johnny Mathis, and others bring you comedy tonight.
Listen

Fiddler on the Roof
When I was growing up on Long Island in the 1960s, this transcendent show was the Sixth Book of Moses. A variety of performers lend their delicate touch to the score: Zero Mostel, Topol, Alfred Molina, Molly Picon, Jan Peerce (in Yiddish)—even the songwriters Bock and Harnick themselves.
Listen

1776
This most American of musicals had a score by Sherman Edwards that was so deeply wrapped up in its narrative and characters that there were no songs that could be extracted for commercial purposes. This episode includes some very rare tracks from the film version, which restores Howard Da Silva’s vocals as Ben Franklin.
Listen

And one final lagniappe: 1776 was the first Broadway show I ever saw, back in 1969, and it remains one of my favorites. Below, the original John Adams, William Daniels, joins me in the studio in 2017 to discuss the show, his role, and even David McCullough!
Listen 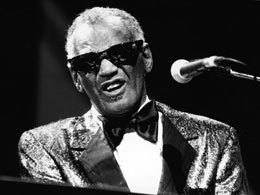