Coming attractions: LOA hits the trail, rounds up four classics in The Western

Earlier this month, we announced our slate of titles for spring and summer 2020. While we included our forthcoming volume The Western: Four Classic Novels of the 1940s & 50s in that list, we weren’t able to divulge which four novels will be collected between its covers.

Now it can be told: Under the aegis of editor Ron Hansen, The Western will present a quartet of essential works from the golden age of the literary Western. Told with brisk narrative energy, psychological depth, and laconic humor, these gripping stories have contributed unforgettably to the Western’s enduring legacy in American culture.

In The Ox-Bow Incident (1940), Walter van Tilburg Clark explores the thin line between civilization and barbarism through the story of a lynch mob that targets three innocent men. Rarely have the psychology and the moral perils of frontier justice been so powerfully explored.

Set in Wyoming in 1889, a time when ranchers and cattle companies waged war with each other, Jack Schaefer’s Shane (1949) is built upon the timeless premise of the arrival of a mysterious stranger, filtered through a boy’s perceptions.

Alan Le May’s The Searchers (1954) follows the dogged quest of two men to rescue a young girl taken prisoner by Comanche warriors. Le May, as he writes in the book’s epigraph, sought to praise “the courage of those who simply keep on, and on, doing the next thing, far beyond all reasonable endurance.”

Oakley Hall’s Warlock (1958), a novel that anticipates the later books of Cormac McCarthy and Larry McMurtry, casts the battle for control of a southwestern outpost as a bloody saga pitting a marauding gang of cowboys and rustlers against the town’s defenders, led by the legendary gunslinger Clay Blaisedell. Thomas Pynchon has called Warlock “one of our best American novels."

LOA fans probably won’t need to be reminded that all four novels were memorably adapted for the screen—most famously in the case of The Searchers, which became the basis for John Ford’s 1956 film starring John Wayne.

As a substantial bonus, editor Ron Hansen will contribute an introduction that not only provides the proper context but also gives an appealingly personal view of these novels from a writer who is himself a celebrated chronicler of the American West. (Hansen’s 1983 novel The Assassination of Jesse James by the Coward Robert Ford was made into an Oscar-nominated film starring Brad Pitt and Casey Affleck in 2007.) 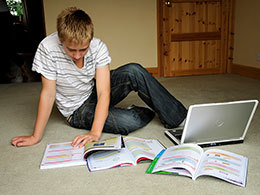 Some helpful links for students at home: Part I—History resources 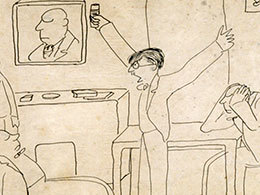 James Thurber: Humor for an age of anxiety

Coming attractions: The Booksellers offers a fascinating tour of the rare book world